The raw zeolite ore is mined, crushed and then taken to the processing plant which is in close proximity to the vein of ore. The mine has hi-tech processing facilities that have been purpose designed and built to process the ore, These state of the art processing and filtration capabilities utilise the latest air induction technology so that no dust or other particles are released into the air making the wearing of face masks unnecessary. At the same time no vermin or other contaminants can infiltrate the equipment or be introduced into the production process, thus maintaining the raw ore’s organic purity.

After the zeolite is mined it is reduced in size from large rocks and gravel to an average size of 40 microns and processed into differing grades. Only one grade is produced as a superior product available for human use All other grades of zeolite from this mine are either incorporated into animal or fish feed or used in water filtration. Natural Extracts Australia Pty. Ltd. (‘NEA’) has an exclusive supply agreement to use the superior zeolite in its products and ZeoActiv8TM is the only product licenced to use this unique Australian zeolite.

The zeolite is then 'activated' (cleansed by a proprietary process using natural solutions and heat) to increase its natural negative charge and flushed with pure molecular water. IT IS NEVER WASHED IN ACIDS.

To this solution we add natural preservatives to produce a unique, natural, liquid food product containing thousands of sub-micronised particles of zeolite, all held in suspension. The sub-micronisation process enhances the remarkable ‘carry and release’ characteristics of ZeoActiv8 which increases its unique bioavailability.

How big is a micron? The eye can see particles of about 40 microns or bigger. One micron is equal to one-millionth of a meter or there are 25,400 microns to one inch. To give you a better idea we have set out some comparative sizes in the table below. 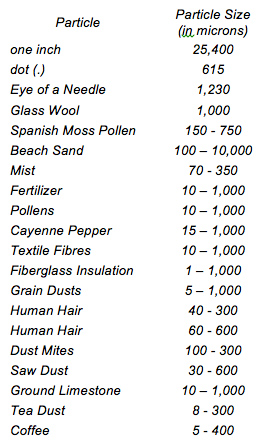 Why do we Submicronise our Zeolite?

The reason we submicronise our zeolite is that it vastly increases the surface area of the zeolite so as to enable it to absorb thousands of extra toxic particles. This is why it is so effective.

When zeolite is sub-micronised it would be similar to splitting up the deck into its individual cards thus increasing the surface area of the deck by over one hundred times or the number of cards in the deck, front and back. This example is simplistic but we think it helps to understand the process that increases the surface area of the zeolite particles.

Imagine the face of each card being composed of thousands of microscopic negatively charged empty cages, one to twenty nanometers wide arranged in a solid, structured matrix configuration similar in shape to a bee’s honeycomb. The openings are similar sided in shape and are called cages for their ability to attract (pull)any  into and trap there, positive charged particles found in any fluids or air near, or around the zeolite.

After the zeolite is put through the sub-micronising process it is measured, inspected and tested for consistent quality and particle size. Each batch is measured using a Malvern Hydro 2000MU laser particle size scanner. An example of the test report results is displayed below. 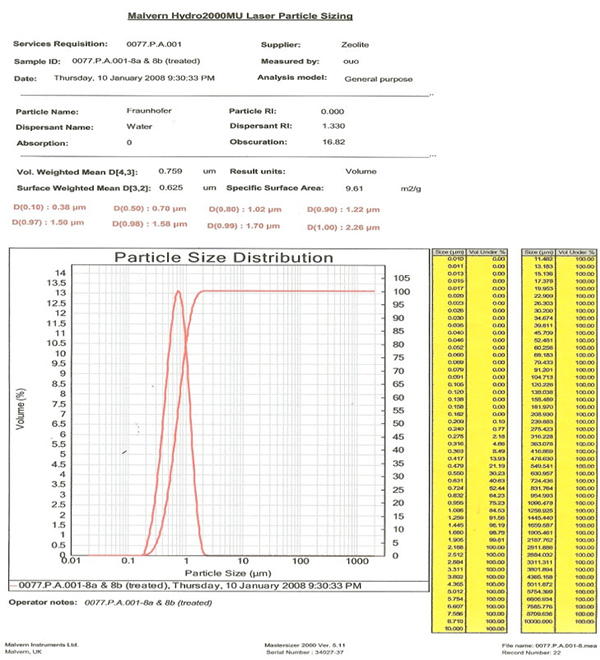 Obviously the sub-micron particle size means that our zeolite has now a huge surface area to more efficiently absorb as many positively charged particles as possible. It does this very effectively. The particle size for each batch averages between .7 and .9 of a micron. Every batch is tested for particle size before being processed

Unfortunately a number of our competitors and some others have stated that our zeolite is not sub-micronised. We believe that we are the only company that does sub-micronised zeolite and the above test result validates our claims. Once the zeolite has been sub-micronised it is then ready to be put through the cleaning processes.

A visual microscopic example of our sub-micronised zeolite used in our products as compared to others:- 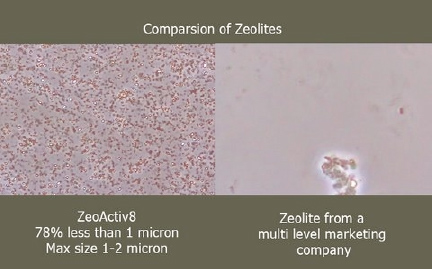 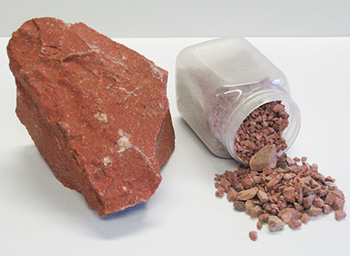 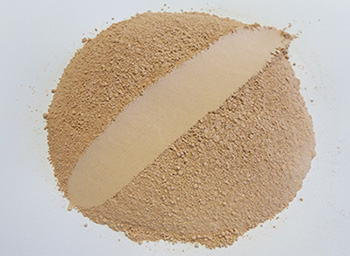 Our Australian zeolite after submicronisation

CLICK IMAGES TO ENLARGE. THEY WILL OPEN IN A SEPARATE BROWSER WINDOW

Go back to previous page

Go back to FAQ's